A Tesla Model S with a Yoke Steering wheel was spotted, giving the public a first look at the futuristic stalkless steering column of Tesla.

Images taken by The Kilowatts show a Model S with manufacturer plates, suggesting that before rolling out the revised steering wheel concept to production vehicles, the company could be in the final stage of public testing.

The absence of a conventional stalk and Tesla’s familiar dual scroll wheels are noticeable in the pictures of the Yoke steering wheel. While the capacitive touch functions were shown in drawings for the Model S and Model X refresh steering wheels, there were no markings for turn signals or drive functions in the release candidate that was discovered.

A polished rear passenger area, draped in Tesla’s famed Vegan white interior and illuminated by the company’s newest rearseat touchscreen display, was clearly visible in what appears to be a production-ready driver and passenger section of the Model S.

The button for folding down the Model S split rear seats, as well as a more prominent side repeater camera, can be seen in the images shared by The Kilowatts.

Tesla vs Apple Car: Which Is The Real Luxury Electric Car?

Tesla’s electric vehicles are premium-priced, but their financing deals make them quite 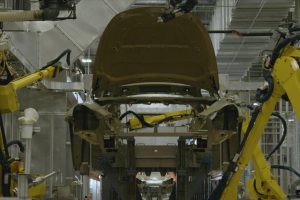 The signs of an EV revolution were all there, but it seems