Tesla will use its plant in Germany, to demonstrate a radical overhaul of how its cars are built, as well as making electric car battery cells and battery packs, CEO Elon Musk said Thursday.

Musk made the comments to bystanders in Grünheide, near Berlin, where the automaker is constructing their new European factory.

Tesla plans to develop a new version of their Model Y crossover vehicle, and potentially even battery cells on-site.

“It will be the first time that there will be a transformation in the core structural design of the vehicle. It’s quite a big thing. Both manufacturing, engineering and design as well,” Musk said in the video.

Musk’s comments come after Tesla acquired a license that will enable it to trade electricity across Western Europe and started surveying customers in Germany about potentially using Tesla electricity in their cars.

“I think we will be building some batteries and cells and other things here. That will be good for stationary storage of wind and solar,” Musk stated.

Musk, who said he was pleased with the progress being made on the plant, told the bystanders that “Deutschland Rocks” and praised the availability of local engineering talent, saying that Tesla would need to make lots of hires.

“We will start off with the factory but we will also do some original engineering and design work. It is going to be, actually to be totally frank, better than the one in the U.S.”

As well as having the most advanced vehicle paint shops in the world at its German factory, Tesla wants to have a color laboratory in Germany.

Tesla is on its way to becoming an electric utility provider 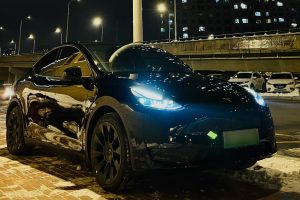 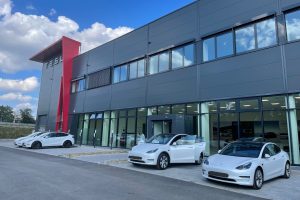