Now it is becoming increasingly clear that the world’s most popular manufacturer of electric vehicles is an all-weather play that simply won’t stop. On Monday’s session, Tesla’s shares jumped 9 per cent to close at a new all-time high of $1,208.34 after the company soundly beat production estimates for the second quarter.

The maker of the Palo Alto, California-based EV shipped 90,650 cars, comfortably shattering the 83,000-unit Wall Street consensus. The highest prediction was for ~86,000 units.

The new surge means that Tesla shares have almost tripled in the year-to-date, giving the company a higher value of $224.05B versus $186.38B than the oil and gas giant ExxonMobil. Exxon stock is down 36.8 percent YTD, in sharp contrast.

In fact, Tesla’s market value is now higher than the $205.2B Toyota Motor’s, making it the world’s most successful automaker.

It’s also many times greater than US ‘Big Three’ joint valuation: General Motors, Ford Motor Corporation, and Fiat Chrysler Automobiles US with market caps of $36.12B, $24.07B, and $20.13B, respectively.

This is certainly a remarkable achievement for Tesla, considering the backdrop of the significant economic backlash and market devastation of COVID-19. But more importantly, it shows that even ultra-low oil prices are unable to kill Tesla or stop the green revolution.

Tesla deliveries marked a 5 percent decline in Y/Y which, in any other conditions, would have given the bears a field day. The fall, however, was much smaller than expectations and fairly mild in comparison with that of its ICE relatives, most of whom reported double-digit declines.

Some analysts were expecting a gloomy future for Tesla because of the persistently low oil prices. Mark Wakefield, Global Co-Head of Automotive and Industrial Practice at AlixPartners, argued that low oil prices would serve as a disincentive for people to buy EVs because lower fuel / operating costs were top of the list of reasons why their gas guzzlers were being phased out.

This line of thinking has been debunked by pointing out that charging a Tesla was still considerably cheaper than gas. For example, the U.S. offers this handy tool the energy department reports that an eGallon actually costs $1.21 compared to the national average of $2.17 for a gallon of standard fuel as per the AAA.

Moreover, the past half-decade, gas prices have remained fairly low, yet Tesla has remained largely resilient.

The million-dollar question right now is whether Tesla deserves its high valuation or not.

At the current share price, the market values the firm more as a tech play than as an automaker. According to Morgan Stanley, Tesla is on target to produce 500K vehicles in the current year, and could quadruple that to 2 million vehicles per year by 2030. Still, a share price of $1,000+ means investors expect it to sell ~4 million / year by the turn of the decade, which may also be asking too much from Tesla.

With the clean energy transition and ESG drive in full swing, investors are also likely to expect Tesla’s solar and battery business to expand alongside its core EV line. Tesla could turn its hordes of loyal EV customers to buyers of its solar goods by convincing them that charging their vehicles using coal-based energy is not very green and they should then produce and store their own solar power. Those are merely secondary companies, however, which actually produce less than 10 percent of the company’s revenue.

The latest rally confirms growing classification of Tesla as a cult stock. Wall Street remains lukewarm on Tesla shares, with only one in four analysts rating a Buy, which is less than the Dow stock’s overall buy-rating ratio of 55 percent.

Over the coming months, Tesla will come under intense pressure as the bears wait to pounce on any execution missteps. This is likely to make the stock fairly volatile, but it remains a long-term sound investment. 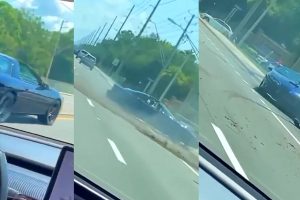 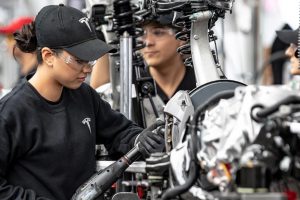