As Tesla (NASDAQ:TSLA) continued to surge on Monday, CEO Elon Musk’s net worth passed Microsoft co-founder Bill Gates. This effectively made Elon Musk the second-richest person in the world who tops the list with a net worth of $182 billion, only behind Amazon founder Jeff Bezos.

Musk’s net worth soared to $7.2 billion during Tesla’s 6.5 percent rise on Tuesday, reaching the $127.9 billion mark. That was enough to surpass Bill Gates, the tech legend, whose net worth is currently at $127.7 billion. Musk’s net worth has risen by around $100.3 billion this year with this new update, the most of anyone in the Bloomberg Billionaires Index, a list that lists the world’s 500 wealthiest individuals.

For Musk, this is an incredible accomplishment, particularly as he ranked 35th on the list when the year began. However, this is not shocking given the meteoric rise in TSLA stock, as Musk’s net worth is heavily linked to the manufacturer of electric cars. Around 75 percent of Musk’s net worth is tied to Tesla, as the Los Angeles Times reported, and they are valued over four times as much as his interest in SpaceX, his private space company.

Interestingly enough this year, Musk and Gates have engaged in the occasional verbal spar. After the skeptical comments of the Microsoft co-founder about electric trucks, Musk remarked on Twitter that Gates still had “no clue” about the vehicles. Gates, on the other hand, has been quite open about his stance on Musk’s open skepticism surrounding the pandemic.

Tesla stock this year has been on a roll, with the shares of the electric car manufacturer rising over 520 percent year-to-date. Tesla is also set to see a boost later this year with its inclusion in the S&P 500, along with five straight profitable quarters.

Elon Musk & Jeff Bezos: The Rivalry of the Century 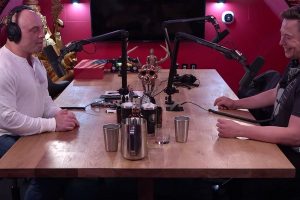