The next-generation Tesla Roadster may be dubbed by Elon Musk as the “dessert” to the main course of the company’s EV offerings, but the all-electric supercar is still one of the most captivating vehicles poised to come out of the Silicon Valley based carmaker. The next generation Tesla Roadster, with its crazy performance and specs, is supposed to be a brutal smackdown to gasoline vehicles, as Musk noted during the vehicle’s unveiling.

The next generation Roadster will go from 0-60 mph in 1.9 seconds, and this is just the vehicle’s base version. Estimates suggest that the Roadster will reach 60 mph in just 1.1 seconds with its SpaceX Kit, which uses cold gas thrusters similar to those used in the Falcon 9 rocket. From there, it will be a straight run at a peak speed of more than 250 mph, as suggested by the CEO during the unveiling of the supercar late in 2017.

The next generation Roadster has caught the imagination of the group of electric vehicles, and this could be seen in the number of fan renders reported to date. Most of those concept videos and images, however, focused largely on the 0-60 mph launch of the supercar. Renders and model videos that simulate a top speed run are still fairly uncommon. That, of course, until now.

Such a video came up with the concept artist Jordi Pau, who is creating CGI automotive projects on his Instagram and YouTube channel. Pau chose to simulate a top speed run, or at least an 0-400 km / h (0-249 mph) sprint for the all-electric supercar, for his next-generation Tesla Roadster project. The result is a visually spectacular and almost unreal featuring a sleek, futuristic car that appears to reach high speed as it reaches the 400 km/h mark in 19.88 seconds.

If the 0-400 km/h performance of the Roadster production is anywhere similar to the vehicle shown in Pau’s concept video, it might put the all-electric supercar amongst the best cars that attempt to run 0-400 km/h at top speed. Even the most extreme production vehicles in the automotive industry, such as the Bugatti Chiron and the Koenigsegg Agera RS and Regera, attempt these feats. The Chiron at 32.6 seconds, the Agera RS at 26.88 seconds and the Regera at 22.87 seconds have achieved some of the most impressive 0-400 km/h runs so far.

What’s very surprising is that the production specs of the new Roadster would be even more extreme than the one of the already crazy prototype of the car. This was demonstrated during an appearance at the Ride the Lightning podcast by Tesla Chief of Design Franz von Holzhausen. According to von Holzhausen, the production version of the Roadster would “in every way” surpass the capabilities of the current prototype. That’s a powerful statement given that the next generation Roadster prototype was already frighteningly fast, and it all but raises the anticipation of a vehicle built to overtake gas vehicles in any applicable full stop metric.

See a concept video of 0-400 km/h of the next Roadster model below. 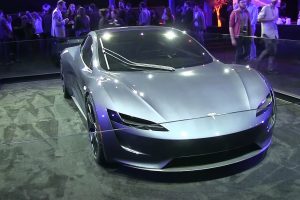 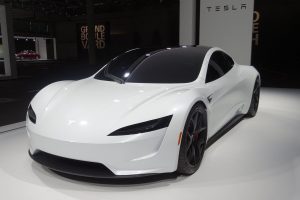