One of the internet’s most famous tech reviewers, Marques Brownlee, aka MKBHD, said in a recent interview that the Tesla Model S Plaid is his favorite piece of tech he has ever reviewed.

MKHBD was invited for an interview by the Stevens Institute of Technology, from where he has actually graduated. MKBHD talked about many aspects of his life and how his YouTube journey started. He now stands at 16.2 million subscribers.

“What was your favorite piece of tech that you ever got to review?” the interviewer asked. To which Marques replied:

“My natural gut reaction is the Tesla Model S Plaid, which is a specific model of the four-door electric sedan from Tesla. Because it’s just one of a kind.

“It’s, in my opinion, it’s like the best overall car in the last decade, and I think that’s like a kind of a hot take but it really rings true to me and it’s also hilariously fun.

“So, yeah, that might be the most fun individual product out of all these crazy things I get to try.”

MKBHD reviewed the Tesla Model S Plaid last year, which we covered in detail. He had some reservations with the steering yoke of the new Model S refresh, but after driving it for around 6,800 miles, he confirmed on Twitter that he has gotten accustomed to the Tesla yoke.

Marques loved the Tesla Model S Plaid so much that he bought one for himself. Before testing the Plaid S, he was even considering buying a Porsche Taycan as his next electric car, but he changed his mind later on.

Calling a Tesla car “a piece of tech” is actually correct. Tesla has advanced the Autopilot technology, fun features, and video games to the point that its electric cars can be defined as giant phones on wheels with powerful computing capabilities.

Since Tesla started delivering Model S Plaid cars in June 2021, the car has made multiple headlines with its extreme acceleration of under 2 seconds. With instant torque and acceleration, the Model S Plaid has made its mark at drag strips around the globe. Just recently, it defeated a Bugatti Chiron in a drag-racing battle — the Bugatti costs at least 26 times more than the Plaid S.

Not just drag racing, the Tesla Model S Plaid has also performed great in track racing. It has conquered the mountainous roads of Pikes Peak and set a new EV lap record at Laguna Seca.

Nikola founder Trevor Milton found guilty of fraud: ‘I did nothing wrong’ 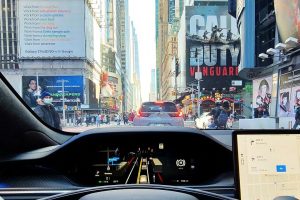 Filings with the Securities and Exchange Commission disclosed that, at the end