One of Tesla’s Giga Press machines at the Fremont Factory was recently involved in a small fire, prompting the city’s fire department to deploy some of its fire engines and trucks to the electric car plant. The fire was addressed using sand instead of water, and no injuries from the incident were reported.

Aerial footage from a local news site showed smoke emanating from one of the Giga Press machines. Fortunately, the fire did not seem to be too serious, as some employees appeared to be standing next to the Giga Press despite the fire.

Two Fremont Fire engines and a truck were deployed to the site. Upon arrival, Tesla staff advised the firefighters to extinguish the fire using sand, not water. Working together, the Fremont firefighters and Tesla’s Fire Response Team were able to contain the fire. A later Instagram post from the Fremont Fire Department confirmed that the Giga Press fire’s cause was traced to molten aluminum and hydraulic fluid. No Tesla or Fremont Fire personnel were injured due to the incident.

While images of heavy smoke coming out of the north side of the Fremont Factory complex suggested that the fire was severe, electric vehicle community members familiar with hydraulic presses have noted that the Giga Press should be operational soon enough–at least after its damaged parts are replaced and its components are cleaned up.

Fires in casting facilities are not unique to Tesla. In 2019, a fire at a General Motors metal casting plant in Saginaw, MI, broke out in an area with molten aluminum in the early morning. After extinguishing the fire, the fire department noted that while the cleanup would likely take a couple of days, the facility’s production line could be resumed earlier.

It remains to be seen if the Giga Press fire will result in delays with the production of the Model Y, which relies on the massive casting machines for its rear underbody. That being said, the fact that the machine could very well be repaired quickly suggests that Tesla’s Model Y production may not be too hampered this quarter by the unfortunate blaze. 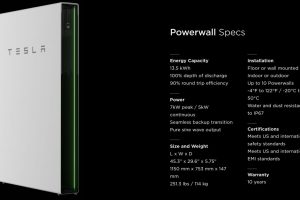 The Tesla Powerwall 2 battery is about to get significantly more impressive,