Tesla’s Full Self-Driving (FSD) Beta development settings have leaked, and it shows a myriad of options that FSD can do, including some amusing ones.

In order to validate an early prototype of the company’s autonomous driving technology, Tesla has been pushing its Full Self-Driving (FSD) Beta program to a small community of Tesla owners over the last few months.

The feature builds on the driver-assist system of Tesla’s Autopilot, but it consists of a new software rewrite driven by new neural networks capable of driving on city streets autonomously. The autonomous driving system, however, needs to be monitored by a driver at all times and the driver is responsible.

Tesla aims to begin a broader release of the FSD update later this month and develop it next year to finally demonstrate its reliability and safety as a full self-driving system with regulators for approval.

We still have a lot to learn about the Tesla Full Self-Driving Beta, but thanks to Tesla hacker ‘green’ who managed to access the developer mode, we are now having a very interesting look at the system, revealing a lot of different settings under the hood:

It reveals many different capabilities of FSD, including showing some that are turned on by default and other that Tesla hasn’t activated yet:

This includes some amusing ones, such as the ability to do a “California Stop,” a common word used by drivers who do not come to a full stop at the stop sign.

A “California Boost” mode and even something called “Chiropractor Adjust Skelton” are also available.

Tesla has been playing a lot with various driving visualizations for FSD in the limited release Beta edition.

At this point, what will eventually make it to the wider release version is unknown, but from this video, it is clear that Tesla has the potential to demonstrate much more than what Tesla FSD beta users will see right now.

CEO Elon Musk has said that later this month Tesla should push the software update to a wider release in the US. 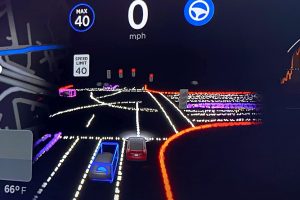 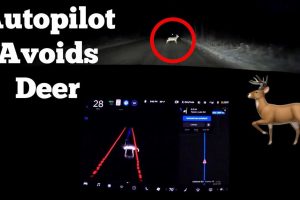 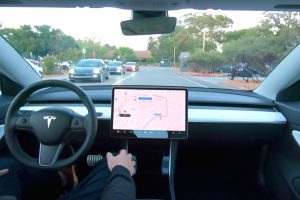