Reported Tesla supplier Saueressig Engineering plans to establish a facility in San Antonio’s East Side—about 80 miles away from Gigafactory Texas. Saueressig is a division of Matthews International Corp. and may be linked to Tesla’s 4680 battery cell initiatives.

Saueressig Engineering was linked to Tesla when it hinted at a major order from an American automobile manufacturer. According to its official website, Saueressig focuses on “special machine construction” for several industries, including the battery sector.

Previous reports have suggested that Saueressig could be involved in making machines for Tesla’s battery cell production lines for Giga Texas and Giga Berlin. Tesla plans to produce its 4680 cells in its new Gigafactories. Tesla’s 4680 cells will be essential to larger vehicles like the Cybertruck and Semi in the United States, as well as the Made-in-Germany Model Y.

In 2019, the Fraunhofer Institute for Material and Beam Technology IWS shared that it partnered with companies such as Saueressig Engineering to develop a dry electrode coating process for EV batteries.

“Our transfer process for dry coating aims to noticeably reduce process costs in electrode coating. This means that manufacturers can do without toxic and expensive solvents and save energy costs during drying. In addition, with our technology, electrode materials can also be used that can hardly or not at all be processed wet-chemically,” Dr. Schumm said.

Tesla executives such as Elon Musk and Jerome Guillen have noted in the past that Gigafactory Berlin and Gigafactory Texas would be home to their own 4680 battery cell production facilities. Considering that Tesla’s 4680 cells would utilize dry electrode technology, Saueressig Engineering’s upcoming Texas site would likely be invaluable for Tesla’s operations in the Lone Star state. 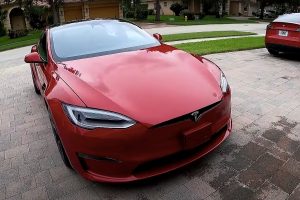