Mirroring comments made a few weeks ago, CEO Elon Musk says that SpaceX could be ready to test two Starships simultaneously within “the next few weeks.”

On November 30th, in response to an unofficial aerial photo edited to show two Starships at SpaceX’s South Texas launch pad, Musk had noted that the depiction “will be real soon.” In the last four months of 2019, a SpaceX team rapidly built an identical ‘launch mount’ – the structure that holds, fuels, and releases Starship – to augment existing facilities. That work began just days prior to the back-to-back Starship SN5 and SN6 launch debuts and a few months after Starship SN4 exploded and damaged the lone launch mount.

Deemed “Suborbital Pad B”, the new launch mount and all associated cryogenic plumbing debuted with Starship SN9’s cryo proof test campaign in late December and is scheduled to support its first Starship static fire as early as January 4th. Meanwhile, Starship SN10 – with SN11 not far behind – was stacked to its full height on January 2nd.

In other words, Musk’s claim that multi-Starship test operations are just a few weeks away is easily believable. Based on Starship SN9’s ill-fated accident just prior to heading to the launch pad, SN10 could easily be ready for transport to “Suborbital Pad A” as early as mid to late January. If SpaceX does as SpaceX usually does, improved efficiency could see SN10 roll to the launch pad to begin preflight tests just a week or two from now.

Of course, Starship SN9 is a day or two away from its first Raptor static fire – a triple-engine test – and could reportedly be turned around for a 12.5 km (~7.8 mi) launch attempt just a few days after that if the test uncovers no issues. Given Starship SN8’s explosive but successful high-altitude launch debut, it’s far from a guarantee that SN9 will be in one piece to greet Starship SN10.

If SN9’s launch debut suffers a few weeks of delays, odds are much better that SN10 will be able to join its senior Starship sibling in a program-first. It’s also possible that Starship SN9 will successfully launch, land, and be greeted by SN10 mere days later.

Likelier still, Starship SN11 – tank section recently stacked to its full height – could be quickly completed, ultimately joining Starship SN10 at the launch pad in late January or February. Ultimately, even if SpaceX defies its own norms and fails to build or test future Starships more efficiently, the company will have no shortage of prototypes to test and launch throughout 2021. Stay tuned! 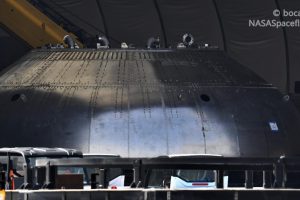 After several weeks of work back at SpaceX’s Starbase rocket factory, the