Last week, Elon Musk announced that Tesla plans to manufacture 20 million electric-powered vehicles by 2030. His bold growth target dovetails with California Governor Gavin Newson’s announcement that he will propose that his state require all new cars and trucks to be non-gasoline powered by 2035. The impetus is clear: Global warming is threatening our planet, and a rapid and dramatic reduction in carbon emissions is essential. Battery-powered vehicles are the most promising alternative, but for the foreseeable future, they depend on cobalt, a mineral found primarily in the Democratic Republic of Congo (DRC), where child labor and unsafe mining conditions are common.

The U.S. Department of Labor has documented the nature and scope of the cobalt problem in the DRC. The department’s most recent global report on child labor concludes that “in 2019, the DRC made no advancement in efforts to eliminate the worst forms of child labor.” Research conducted by the department’s Bureau of International Labor Affairs (ILAB) indicates that government labor inspectors in the DRC “failed to conduct any worksite inspections for the fourth year in a row.” The report includes a focus on children working in cobalt and copper mines in the DRC and especially in so-called artisanal and small-scale mines (ASM). Often located within larger, more formal mining sites, ASM sites are populated by small-scale subsistence miners not officially employed by the mining companies who gather minerals and typically sell them to middlemen on open markets. It is estimated that 15% to 30% of cobalt from the DRC comes from ASM sites. These miners routinely bring their children to the sites, in part because they have no child-care, local schools are either inaccessible or woefully overcrowded or because they desperately need additional family income. At the mines, each child is given a burlap bag and instructed to gather small pieces of cobalt by hand. Though the estimates of children working in these mines vary widely, the DOL report cites one estimate that “as many as 35,000 of the DRC’s 255,000 artisanal cobalt miners are children.” It concludes that these “informal or illegal ASM operations [are] leaving children uniquely exposed to hazardous working conditions and, in some instances, forced labor.”

In a report published last month by the World Economic Forum, Dorothee Baumann-Pauly, a colleague of mine at the NYU Stern Center for Business and Human Rights, describes current conditions at three large mining sites. Based on her visit to the DRC last fall, the report makes a series of thoughtful and practical recommendations. First, it calls on companies that rely on cobalt to power their products to acknowledge their reliance on DRC-mined cobalt and the attendant risks and responsibilities. More than 70% of all cobalt mining globally takes place in the DRC, and most of the known reserves are there as well. If companies intend to source cobalt from the DRC, they need to commit to addressing child labor and mine safety as business priorities.

Baumann-Pauly urges companies to help formalize artisanal mining activities and establish a robust monitoring system at the mine sites. This will help ensure that children don’t gain access to the mines and encourage local authorities to provide them access to decent schools. Within the mines a formalized process will help to establish safety standards and a system to apply them—measures, for example, that would limit the depth of pits and provide protective equipment. In her report, Baumann-Pauly, who also directs the new Geneva Center for Business and Human Rights at the University of Geneva, cites as an example a formalization pilot project at Mutoshi overseen by Trafigura, a large Swiss-based commodity trading firm that has a significant commercial presence in the DRC. Trafigura helped Baumann-Pauly gain access to that mine , and she sees it as offering some insight into how this might work in practice.

Finally, and perhaps most importantly, Baumann-Pauly makes a compelling case for collective action by those working throughout the cobalt supply chain, including local mine owners, commodity traders, battery makers, and global buyers such as auto companies and consumer electronics firms. Fortunately, some mostly European companies have begun to come together in this way to wrestle with these daunting challenges. They have joined a new initiative called the Cobalt Action Partnership, in which Baumann-Pauly and I also are participating. Its objective is to create industry-wide human rights standards and metrics, as well as a system to implement those standards and assess compliance. Among the leaders of this collective effort are German automakers BMW and Volkswagen, battery material manufacturer BASF, and Trafigura. The partnership aims to work closely with local actors in the DRC, including the government, mine owners, civil society organizations, and mine workers themselves to build an effective system to combat child labor and address unsafe working conditions. Companies that adopt and are deemed compliant with these standards would be able to assure their customers that they are addressing child labor and mine safety issues.

American automakers are notably missing from this table, including Ford, General Motors, Chrysler, and Tesla. Several years ago, Elon Musk vowed he would avoid sourcing from the DRC altogether, instead relying on North American mines, which account for less than 4% of the global reserves. If he is forecasting the production of 20 million electric vehicles in a decade, this clearly will not be enough. Alternatively, Musk is promising that his firm is developing a new cobalt-free battery technology. Yet, as his firm and others pursue these new technologies, many experts estimate that it will be a decade before any of the alternatives are commercially available at scale. So, not surprisingly, in June, Tesla announced a partnership with Glencore, one of the world’s largest commodity trading firms which also is mining cobalt in the DRC, for lithium-Ion batteries. Tesla plans to purchase cobalt from Glencore to manufacture its own batteries in Germany and China. This partnership, coupled with Musk’s ambitious plans to lead in the global production of electric vehicles, should compel both companies to come to the table with their competitors and to join the collective effort to end child labor and support responsible cobalt mining in the DRC. 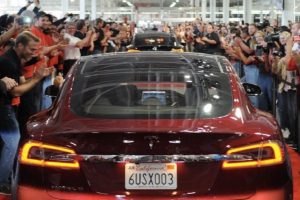 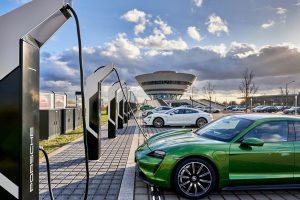