Tesla’s vision for the Robotaxi fleet has always been to revolutionize the way vehicle ownership is perceived. Tesla owners would eventually be able to let their car run an entire shift of ride-hailing without the presence of a driver, letting a $40,000 side-hustle compile an additional American base salary all while you sleep.

In the past, Tesla has had lofty expectations for the Robotaxi fleet, but the timelines have commonly fallen short as the automaker has not been able to solve the complex puzzle that is fully autonomous driving. With that being said, Tesla has surely made plenty of strides in its quest for a self-driving car. It has expanded its FSD capabilities outside of the United States and has even expanded its Beta testing program to over 100,000 active members.

However, the tone of Tesla’s Robotaxi vision a few years ago was truly based on a potential income stream for owners, and not necessarily on how much the fleet would help the company’s focus on sustainability and environmentalism. While previous narrations from Tesla executives have dialed in on the potential accomplishment of being the first carmaker to achieve Level 5 autonomy, Tesla’s 2021 Impact Report painted a different picture, and it had more to do with efficiency than anything.

Tesla has a pretty good nose when it comes to how its products operate and what consumer sentiment is regarding its vehicles. One of the most revolutionary ways Tesla has improved vehicles is through Over-the-Air software updates, which bring new features and bug fixes to your car the same way Apple sends new emojis to your iPhone. The difference is that Tesla’s software updates can help make the vehicles more efficient by operating with less energy used per mile.

“The energy efficiency of Tesla vehicles will continue to improve as we improve our technology and powertrain efficiency,” Tesla said in the Impact Report. Of course, through groundbreaking new product developments, improvements to battery chemistry, and even efficiencies in the supply chain and manufacturing buildout could eventually translate to better efficiency in Tesla’s cars. However, the most striking bit of information had to do with Tesla’s changing perspective on the Robotaxi fleet:

“It is also reasonable to assume that our high-mileage products, such as our future Tesla Robotaxis, will be designed for maximum energy efficiency as handling, acceleration and top speed become less relevant. This will minimize cost for our customers as well as reduce the carbon footprint per mile driven.”

Tesla’s Robotaxis will undoubtedly contribute to more efficient vehicle use, as they will perform cautiously and more consistently than a human driver can. Human drivers still love to feel the pull of Tesla’s instant torque, they love to feel the incredible handling as the all-electric vehicle maneuvers around a tight turn. Despite these perfectly normal behaviors, they do decrease driving efficiency, and Robotaxis, when used in a much wider sense than many of us will imagine, will only contribute to Tesla owning the reputation for building the most efficient EVs on the market. 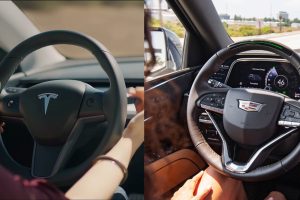 Tesla Autopilot’s most formidable rival from legacy auto is on a break,