Originally known as the Wide Field InfraRed Survey Telescope (WFIRST), NASA recently renamed the mission in honor of Nancy Grace Roman, a foundational force behind the Hubble Space Telescope. Fittingly, the Roman Space Telescope’s basic design is reminiscent of Hubble in many ways, owing to the fact that the mission exists solely because the US National Reconnaissance Office (NRO) chose to donate an unused multi-billion-dollar spy satellite – a satellite that was effectively a secret Earth-facing version of Hubble.

However, thanks to decades of improvements in electronics, electromechanics, and the instrumentation side of spacecraft and space telescopes, RST will be dramatically more capable than the Hubble telescope it resembles. And now, after a several-year fight for survival, the Roman Space Telescope officially has a ride to space – SpaceX’s Falcon Heavy rocket.

Falcon Heavy continues to be a bit of a paradox, winning contract after contract for increasingly high-value flagship launches despite having not launched once in more than three years. It’s a bit of a self-fulfilling prophecy, at this point, as the major missions that are increasingly being entrusted to Falcon Heavy are far more likely to run into significant spacecraft-side delays. At one point in late 2021, for example, SpaceX had five Falcon Heavy launches tentatively planned in 2022 – all but one of which had already been delayed several months to a year or more. Seven months into 2022, not one of those missions has launched and it’s looking increasingly likely that Falcon Heavy will be lucky to fly at all this year.

Despite having a similar resolving power, RST’s primary wide-field instrument will have a field of view 100 times greater than Hubble, meaning that the new telescope will be able to gather magnitudes more data in a similar time. Its primary goals include measuring “light from a billion galaxies over the course of the mission lifetime” and performing “a microlensing survey of the inner Milky Way to find ~2,600 exoplanets.” A second coronagraph instrument will “perform high-contrast imaging and spectroscopy of dozens of individual nearby exoplanets.” According to the Jet Propulsion Laboratory, “the Coronagraph provides a crucial stepping stone in the preparation of future missions aiming to [directly] image and characterize Earth-like planets [that are] 10 billion times fainter than their host star.”

According to NASA, “the telescope’s science program also includes dedicated investigations to tackle outstanding questions [about the nature and] effects of dark energy and dark matter, as well as a substantial general investigator program to enable further studies of astrophysical phenomena to advance other science goals.”

Because RST is also focused on infrared wavelengths of light, it could be an excellent companion to the James Webb Space Telescope (JWST). Whereas RST is a wide-field survey observatory that aims to observe and catalog billions of galaxies, stars, and planets, JWST’s far larger mirror is optimized for up-close observation of individual targets or deep gazes into tiny swaths of sky. RST could ultimately work a bit like an MRI or CAT scan to JWST’s biopsy, telling the surgeon where to look but only hinting at what it might find.

According to NASA, the ~$4.3 billion space telescope’s Falcon Heavy launch contract will cost an exceptionally steep $255 million to send the spacecraft to the Sun-Earth L2 Lagrange point about 800,000 kilometers (~500,000 mi) from Earth. NASA’s contract to launch the even more expensive Europa Clipper spacecraft all the way to Jupiter with a fully-expendable Falcon Heavy rocket is expected to cost less than $180 million.

NASA’s press release also claims that RST will be ready to launch as early as October 2026. A different press release from September 2021 did not mention the 2026 target and only noted that RST’s launch is scheduled no later than May 2027.

Tesla Model Y is the fastest-selling used car on the market: study 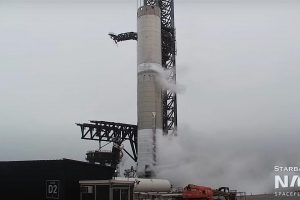 In a what is likely a prelude to engine installation, SpaceX has