In the executive summary, it said that the decision to exclude Starlink from the Rural Digital Opportunity Fund (RDOF) was flawed in both matters of law and policy. According to the document,

“It fails legally because it contradicts the record—including SpaceX’s and Starlink’s proven capabilities—it contradicts the Commission’s stated rules for the program, and it rests on unsupported conjecture and outside-the-record information apparently cherry-picked from somewhere on the Internet.”

“Worse, it fails the RDOF’s very purpose: closing the digital divide. As the last few years have highlighted, it is critical to connect all Americans as quickly as possible, whether to enable kids to do their homework, empower parents to work from home, help doctors provide telehealth services, or assist first responders with emergency situations. The Bureau’s decision undermines this goal, leaving the very Americans that RDOF was supposed to connect stranded indefinitely on the wrong side of the digital divide.”

“This decision is so broken that it is hard not to see it as an improper attempt to undo the Commission’s earlier decision, made under the previous Administration, to permit satellite broadband service providers to participate in the RDOF program. The decision appears to have been rendered in service to a clear bias towards fiber, rather than a merits-based decision to actually connect unserved Americans. Commissioner Starks, in adopting the RDOF Order, correctly foresaw that “next-generation satellite broadband holds tremendous technological promise for addressing the digital divide and is led by strong American companies with a lengthy record of success.”

“Rightly, he directed the Bureau to “evaluate those applications on their own merits.” But the Bureau inexplicably ignored this direction and instead applied far different standards to SpaceX’s application precisely because SpaceX proposes to use satellites.”

SpaceX also said that the Bureau’s decision to improperly misuse data outside the record to penalize it alone for its system’s current speeds was one of the many errors. Another error was that the Bureau ignored SpaceX’s “robust record evidence” of its proven ability to quickly expand and upgrade its network.

The Bureau failed to account for SpaceX’s transparent all-in pricing against the “opaque pricing—which disguises the true cost to consumers—common in the industry,” SpaceX said.

“The Bureau’s decision holds SpaceX to standards not adopted by the Commission for the RDOF program. Indeed, these are standards that no bidder could meet today. Changing the rules to undo a prior policy is grossly unfair after SpaceX has invested thousands of employee hours and millions of dollars preparing to meet its RDOF obligations on the reasonable assumption that the Bureau would apply the Commission’s rules in an even-handed manner.”

“Far more troubling, as no RDOF applicant offering fiber even bid in the majority of the territories SpaceX committed to serve through RDOF, the Bureau’s decision leaves the Commission with no plan to connect many unconnected Americans, undermining the very purpose of this program. The decision should not be allowed to stand, leaving the people in these rural areas across our country behind yet again.”

Last month, FCC Commissioner, Brenden Carr, called out the agency for denying Starlink’s award. Along with a statement posted to Twitter, he tweeted that it would leave rural Americans “waiting on the wrong side of the digital divide.” 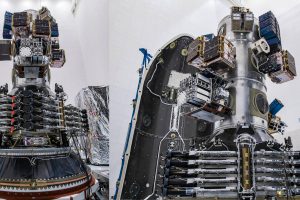 A SpaceX Falcon 9 rocket has successfully delivered 143 spacecraft to orbit, 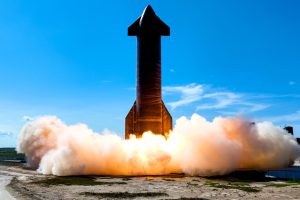 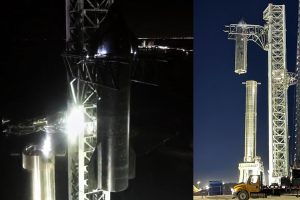 For the second time ever, SpaceX has fully stacked a two-stage Starship 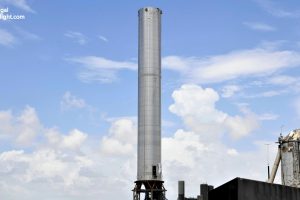 Within the last week, SpaceX’s South Texas Starship factory appears to have