As the legacy automakers increase their commitment to electric vehicles, just about all the auto industry analysts expect that Tesla’s currently dominating market share will erode. However, this is a generalization that glosses over a certain amount of disagreement, and a whole lot of uncertainty.

How quickly will the Old Guard be able to ramp up their EV sales? What factors will influence their relative success? And which brands will mount the strongest challenges to the young king? A new chart from Visual Capitalist, based on market projections by EV Volumes, adds some (hypothetical) details to the generic “Tesla loses market share” narrative.

Many of the legacy brands have been producing EVs for years, but these are best described as R&D projects and test marketing programs—“compliance cars” is the term used in the trade. It will take some years for them to build the supply chains and sales-and-service networks required to make the transition to mass-market EV sales. Between now and 2025, EV Volumes expects Tesla to remain king of the hill, dropping from a 23% to a 21% market share.

One thing every EV industry observer agrees on (and something that Tesla understood very early in the game) is the critical importance of the battery supply chain. Any automaker that would sell EVs in volume must first establish manufacturing facilities for battery packs, secure a supply of cells, and make sure that sufficient raw materials will be available. If you want to know which automakers are serious about going electric, look into what they’re doing to put the pieces of this supply chain together.

Volkswagen is expanding production of battery systems at its Braunschweig plant, has established a pilot battery recycling plant, and has established a battery engineering lab at the Chattanooga site where it builds EVs for the North American market. The German giant plans to build six battery factories in Europe by 2030. EV Volumes expects VW to be the second-largest EV maker by 2025, with a 12% share of the market.

Other automakers are also well aware that batteries are the big banana. Ford has formed a joint venture with SK Innovation to build three huge new battery factories in Kentucky and Tennessee. GM recently announced plans to build a new battery development facility in Michigan.

EV Volumes expects GM, together with its Chinese joint-venture partners Wuling and SAIC, to be the third-biggest EV-seller in 2025, with an 8% market share, followed by Hyundai-Kia, with a 6% share. It predicts that the Renault-Nissan-Mitsubishi alliance, and BYD, both of which currently own respectable portions of the EV market, will lose share, and be surpassed by Stellantis. Interestingly, it expects today’s two biggest EV nay-sayers, BMW and Toyota, to surge forward and claim a small-but-respectable 3% share apiece by 2025.

Charts like this make interesting conversation-starters, but the predictions need to be taken with a large dose of lithium salt. Many things can go wrong on the electric road—launches of key new models, and new factories, can be delayed, sending forecasters back to the drawing board. History has shown that automakers can abandon ambitious announced EV plans in response to management changes or shifts in political winds. (On the other hand, things can also go right—for example, Ford’s upcoming F-150 Lightning could turn out to be a runaway hit, and the company might just decide to run with it.)

It’s also worth pointing out that Tesla has one of the world’s most powerful brands, and is a fast-moving target that announces new innovations on a regular basis. It may not accept a major loss of market share as tamely as the pundits of the world seem to assume it will. 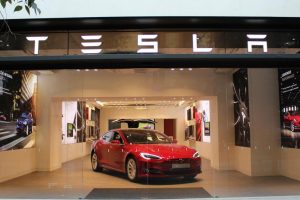 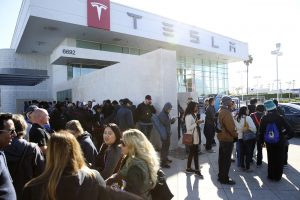 A couple weeks ago, The Wall Street Journal reported about comments Elon Musk made during 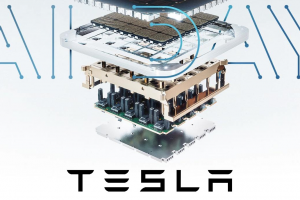