The inventor of the Cyberbackpack is extending an Elon Musk-esque offer to Tesla employees, offering a discount at a familiar value to any company worker who wishes to buy a backpack based on the Tesla Cybertruck design.

The Cyberbackpack was invented by Riz, a Tesla owner and early adopter of electric vehicles. Riz was inspired to build a backpack for the ultimate Cybertruck fan, featuring USB-C charging ports, expanding storage capacity, and a carbon-fiber compartment for maximum protection of your goods. Just as the Tesla Cybertruck sports a war-ready design, the Cyberbackpack also provides complete protection for books, laptops, and other tech items.

Riz and CyberBrands are now offering any Tesla employee interested in snagging the Cyberbackpack, which usually retails at $249, a…you guessed it…69 percent discount. All you have to do is fill out the Typeform on the product website.

Riz said the idea came from Tesla CEO Elon Musk’s recent decision to buy Twitter, as employees will have more money to spend on Tesla products to support the company if they want the backpack.

“We are doing what we can to help Elon buy Twitter. More money in Tesla employees’ pockets means more money for them to spend on Tesla products,” Riz said.

The Cyberbackpack is a product that has a rich story. After Riz proposed the idea of working on the backpack with Tesla, he became alarmed when the automaker filed a trademark claim for the product’s name.

“My goal is to work with Tesla in some fashion to distribute the product. That’s why I reached out initially. However, if that does not happen, then I would like to continue marketing and selling on my site,” Riz told us in an interview back in April. He actually started developing the product after the Sandy Hook tragedy as a way to protect children at school.

The debacle with Tesla, which was really done to protect the likeness of the Cybertruck as most people would associate it with Tesla, a patent attorney explained to us, Riz decided to build a new company: CyberBrands. This has resulted in several new products based on the Cyberbackpack, including a power bank and a sling bag (which are unfortunately not a part of the Tesla employee promo).

I personally use a Cyberbackpack daily, as I use it for a gym backpack every day. Additionally, it came in handy with a USB power bank over the Summer on the beaches of Assateague Island. After the Bluetooth Bose Speaker or my iPhone was low on a charge, the Cyberbackpack’s awesome versatility as a portable charger comes in handy. Of course, there are days my headphones aren’t charged for the gym, and the Cyberbackpack takes care of that as well.

It’s a great backpack and has a lot of space and storage. I packed an entire weekend of clothing, plus my MacBook, iPad, and chargers in the bag, and still had room leftover. For the price after the 69 percent discount that Riz is offering to Tesla employees, it’s really a bargain.

Non-Tesla employees, you can buy the Cyberbackpack here.

Disclosure and Promotional Rules: 1. The discount amount will be 69% off the listed price. 2. The discount cannot be combined with other discounts. 3. The discount only applies to backpacks with power banks. 4. The discount can only be used one (1) time and by the email address provided. 5. Discount code will expire in 24 hours, after which you will have to request a new code. 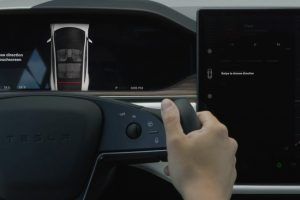 Tesla (NASDAQ:TSLA) will hold its first-quarter earnings call after Monday’s trading, and

Over the years, it has practically become a tradition for Tesla to